Based in Indonesia, this leading super app company empowers businesses by providing innovative financial solutions. This market leader strived to build a cross-platform, MVP (Minimum Viable Platform) on a serverless platform to enable small and medium-sized businesses in Indonesia to manage their employees’ attendance and payroll. They wanted to develop an app that supports both Indonesian (Bahasa) and English languages for ease of use and right audience targeting.

The company wanted to build this HR and Salary Management application from scratch by utilizing a serverless platform. Going serverless would ensure easy scaling without over-provisioning of infrastructure during the MVP evaluation process.

The entire frontend setup was deployed using AWS Amplify to build extensible, full-stack web and mobile apps faster and with ease. The backend was developed to support both mobile and web applications. It was built with Serverless Architecture, including AWS Lambda, a serverless, event-driven compute service, and Aurora Serverless (PostgreSQL), a relational database built for the cloud. They used AWS SAM and GitHub actions to automate multiple deployments and software workflows. 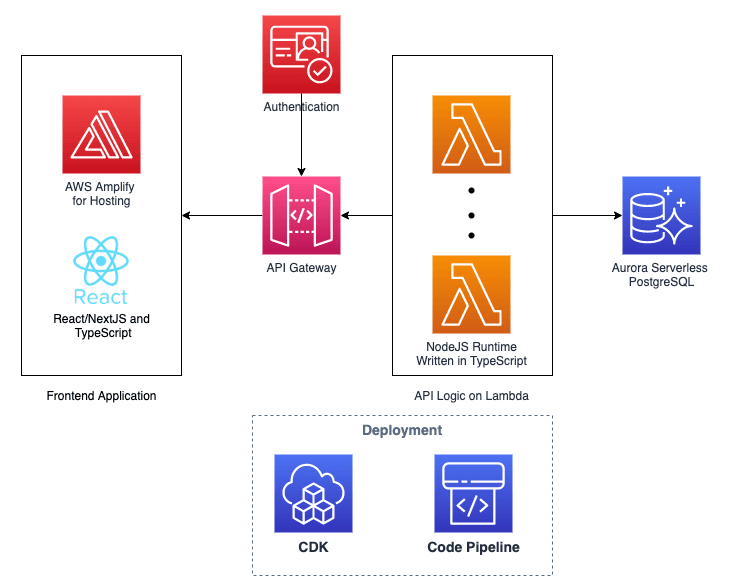 To design and develop a new scalable MVP app that identifies and collects audience feedback quickly, AntStack made the product development process agile, went serverless, and leveraged the CI/CD (Continuous Integration/ Continuous Delivery) first approach. In addition, since the web application was responsive, users were able to view and use the app on their web browsers as well.

The app company wanted to build a cross-platform mobile-first app to create a single codebase that can be shared across platforms. AntStack decided to build the mobile-first app with React, without getting into native development for MVP. This mobile-friendly web application was then converted and shipped into apps in Android and Apple app stores with the help of Capacitor. With a capacitor, it was possible to build a single app for Android, iOS, and the Web, all with a single code base. The capacitor also supports building plugins.

Indonesia’s financial super app company wanted to go serverless using the UI prototyping approach. AntStack turned the static designs into realistic versions using Figma for prototyping UX/UI designs. They created interactive flows in the design with advanced, yet easy-to-use features for the users. This UI prototyping approach and being serverless helped in validating the flow with the smaller set of internal users of the application. Figma’s prototyping features allowed the company to create interactive flows for a user to interact with the different designs. Prototyping in Figma created multiple flows for the prototype on one page to preview a user’s browsing journey and experience. This helped the developers understand the user better and deploy an optimal solution.

The app company wanted to target the app majorly for Indonesia’s audience and therefore wanted it to support multiple languages, by providing an option for the users to switch between English and Bahasa. AntStack built this app while meeting the i88n (internationalization) standards to support multiple languages. It will support English, and Bahasa (Indonesian) languages to begin with, but with minimal changes, it can easily support more languages in the future.

While the app company wanted to advance with a technologically innovative solution, they were hoping to optimize cost in the process too. AntStack utilized capacitors to deploy a single app to multiple platforms. It is one of the most cost-effective ways for cross-platform development. Therefore, instead of writing separate code for each platform, AntStack utilized a cross-platform solution and saved 50% or more on time and effort.

The company wanted to develop a quality product with improved features. At the same time, they were looking to bring their internal tech team up to speed on the new app and ensure future development efficiency. AntStack was able to meet the design and development quality requirements of the customers and helped the client’s tech team understand the tool easily to continue development.

AntStack was able to meet the design and development quality requirements from the customers and assisted the client’s tech team to understand the tool easily, to continue the development further.

The MVP application is yet to go live, but the financial app company is very pleased with the development process and UI Prototyping approach that ensures a better user experience. They are delighted with the faster app through serverless cloud computing. The leading financial app company is looking forward to incorporating more automation and upgradation with AntStack. AntStack simplifies serverless deployments and optimizes operational management. If you are looking to build a highly stable, scalable, and flexible business solution with complete technical support.